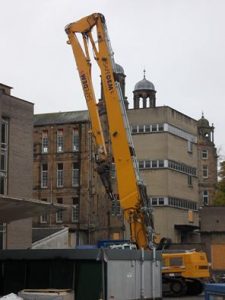 Demolition equipment is on site at the Victoria Infirmary. Here are 10 things you may not know about the re-development.

The redevelopment has been expected for around 10 years and the new Victoria opened in 2009. The local Community Councils pushed throughout that time for consultation, and that’s one reason there is a master plan requirement. You may want to ask the ward councillors to ensure that the master plan requirement is enforced.